How to Replace Your Launcher and Homescreen on Android 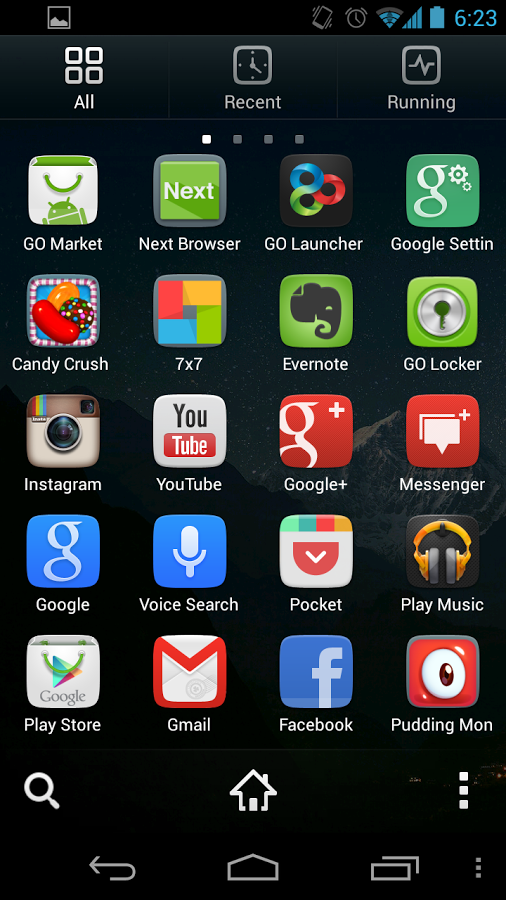 One of the better features of Android is how customizable it is. Almost every part of the system seems to be modular and available for the user to replace and mess about with. So, if you’ve ever wondered if you can change something about your phone, chances are that you can. The launcher and homescreen are no exception. In case you wondering what these are, the homescreen is what you see when you press the home button on your phone: it’s where you put your widgets, your shortcuts and your wallpaper. On the other hand, the launcher is the part of the system that displays and allows you to launch your apps. On stock Android, it appears when you press the middle icon in the homescreen, and looks like the picture below. 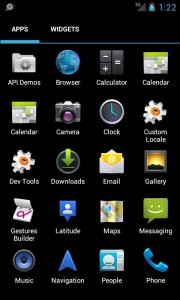 The homescreen and launcher belong to the same app, so if you want to change one, all you have to do is install an alternative launcher and you should be able to customize both right away. So, let’s take a look at some of the most popular launchers out there, and see if one strikes your interest. Installation instructions are provided within each app, and everything is easily reversible. In case you run into any issues, just follow the instructions at the end of this post. For now, let’s take a look at the most popular launcher replacements for Android:

GO Launcher has been one of the go-to launchers on Android for years. It belongs to the GO suite, which offers a bunch of replacements for native system functions and other apps, all with the GO branding. GO Launcher is extremely efficient and smooth, in some cases performing even better than the stock Android launcher. It also offers all the same functionality the stock launcher does, like having a grid to show your apps, setting widgets and using shortcuts, while also making available to the user a bunch of in-depth settings to tweak the app with. These include choosing your own transitions, hiding apps from the launcher, a very deep theme engine and plugins to interface with the other GO apps. 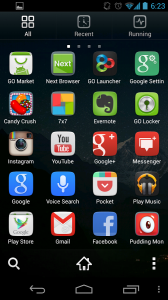 GO Launcher is a good launcher overall, but it’s especially good if you use other GO apps, since the system integration is so deep. It’s also very easy to use and works similarly to the stock launcher, so it shouldn’t be very confusing to new users. One thing it does wrong is that it does try to push its own products frequently, to the point where it becomes annoying. A lot of extra features also require additional apps too, so it’s not exactly easy to set up to your liking if you’re obsessive about the way things look. Being free and chock full of features, it’s worth a look either way.

LauncherPro is one of most popular alternative launchers for Android, and it was at one point the most popular aftermarket launcher for the platform. However, it stopped being updated and dropped in popularity. Despite that fact, it is still widely used and still retains the features that made it popular back in the day, namely the smooth performance and deep customization and features. It’s also completely free and widely documented, but can be a little scary for non power users, and requires a bit of fiddling to get most things right. It’s worth checking out if you’re on the market for a new launcher, though. 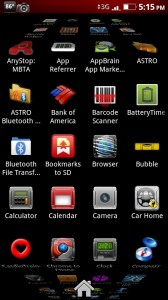 Aviate has the traditional launcher and homescreen elements, but they take a backseat to the services and panels Aviate has to offer. Basically, Aviate still allows you to launch your apps and place shortcuts, but uses up your homescreen to customize it with thematic information you select. For example, the main screen allows you to select from a bunch of “spaces” that change your homescreen with information related to that space. For example, selecting the “Time” space would show you information related to the time and weather, and selecting the “Going Somewhere” panel provides you shortcuts to directly navigate you home and places all your GPS/navigation apps on the main homescreen. The content of the space is toggled by pressing the name of the space on the homescreen, so it doesn’t take space until you toggle it. Aviate also automatically groups apps of the same type and places them in a dedicated screen, grouping all your game, music or social apps on their own section, and it’s quite competent at it from my experience. 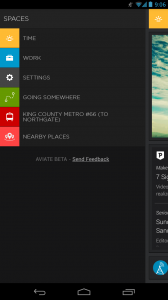 The launcher itself is pretty bare bones, and just lists all your apps in alphabetical order. Still, the main way to launch your apps if from the homescreen, so the launcher is there more to help you find a app and make a shortcut, rather than actually launch it. Aviate is very restrictive and only does things its own way, but if you get along with the program, it’s surprisingly nice and efficient to use. The Settings are incredibly bare-bones and simple, and its clear you shouldn’t fiddle with it and just adapt your routine to it. It can be nice, but it’s not for everyone. If the concept intrigues you, it may be worth checking out. It’s worth mentioning that Aviate is currently in Alpha, and is invite only. What this means in practice is that you can’t just get the app, you have to apply for a code and wait a little while (it was just under two weeks for me) until a code is sent your way. 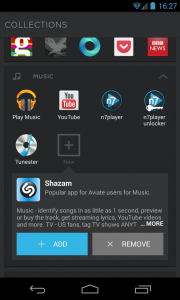 Also one of the community sweethearts, ADW has been around for a while now and is very smooth and chock full of features (even in the free version, but even better in the Pro version). It’s like LauncherPro if it hadn’t stopped being updated. ADW is constantly being developed and constantly adding features and refining performance, and almost every aspect of the app is customizable, from homescreen to launcher. It’s highly flexible and supports Android as far back as 1.6, has a built in theming engine and a bunch of enhancements to the stock elements of the OS. Setting it up is also relatively simple, since it prompts you to do so when you run it the first time. All transitions, spacing and behavior of the elements is able to be changed, so you’re dealing with a real power user app if you wish to, but it’s also configured nicely out of the box. Worth checking out, and you should invest in the Pro version if you end up sticking with it to access extra options and effects. 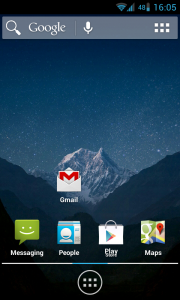 If you accidentally get stuck with a launcher and don’t know how to revert it, or just want to get back to the stock launcher, the easiest way is to simply uninstall the app. If you don’t want to do that, just go to the Settings, then Apps, then All and find your current launcher on the list. Tap it and then select the “Clear defaults” button at the bottom, and then next time you press the home button on your device, Android will prompt you to choose a launcher and if you just want to launch it this once or always. Just select your stock launcher from the list and you’re back to basics! I also hope you enjoyed this little list, and that it sparked your interest or at least informed you of what other choices are out there. Have a launcher recommendation not on the list? Feel free to let us know about it in the comment section below!

Filed under: How To's and Tagged: how to 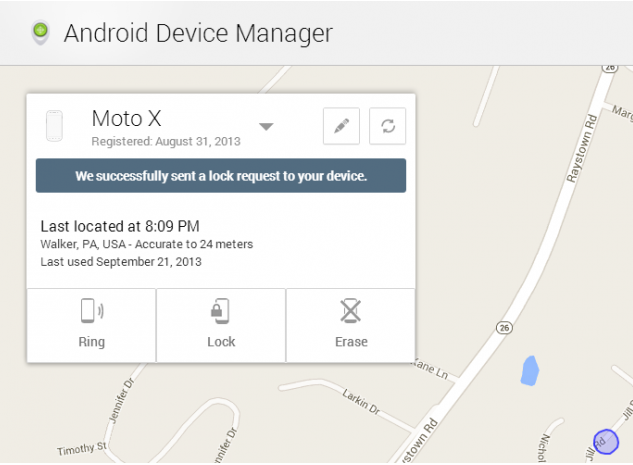 Previous post How to Locate, Lock and Wipe Your Device with Android Device Manager 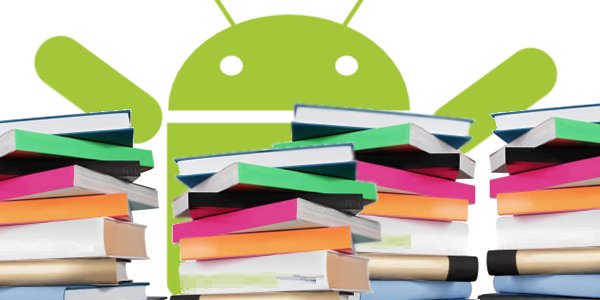 Next post App Review: Readmill - An eBook Reader for Android