How to take a screenshot on the HTC One S (free – no app required!)

Most Android phones require Root access and/or an app in order to be able to take a screenshot of your phone’s display. Well, that’s no longer the case for the HTC One S! With the One S you can take a screenshot easily without any third-party apps! You heard correctly… no root or third-party paid apps required. This is now a stock feature on Android 4 ICS (Ice Cream Sandwich). This method is totally free and simple! There are actually two different screenshot methods available for the One S. Just follow the steps below to start taking screen shots on your HTC One S. 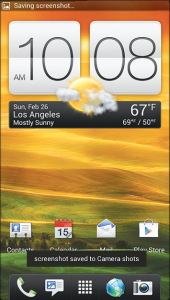 1. Hold down the POWER button and then press the HOME button.

2. That’s it! Seriously, it’s that easy! You’ll see a message appear on the screen that says “screenshot saved to Camera shots”. Your screenshot will be in your DCIM (Camera) directory. You can then go to your Gallery app to see the screenshots that you have captured.

NOTE: Method 2 is a standard feature on Android 4 ICS (Ice Cream Sandwich). I’ve included both methods here in case one works and the other doesn’t. Just try either one of them and see which one works for you!

Filed under: How To's and Tagged: Android, how to, HTC One S, Screenshot

Next post How to Delete History & Cleanup your Android device