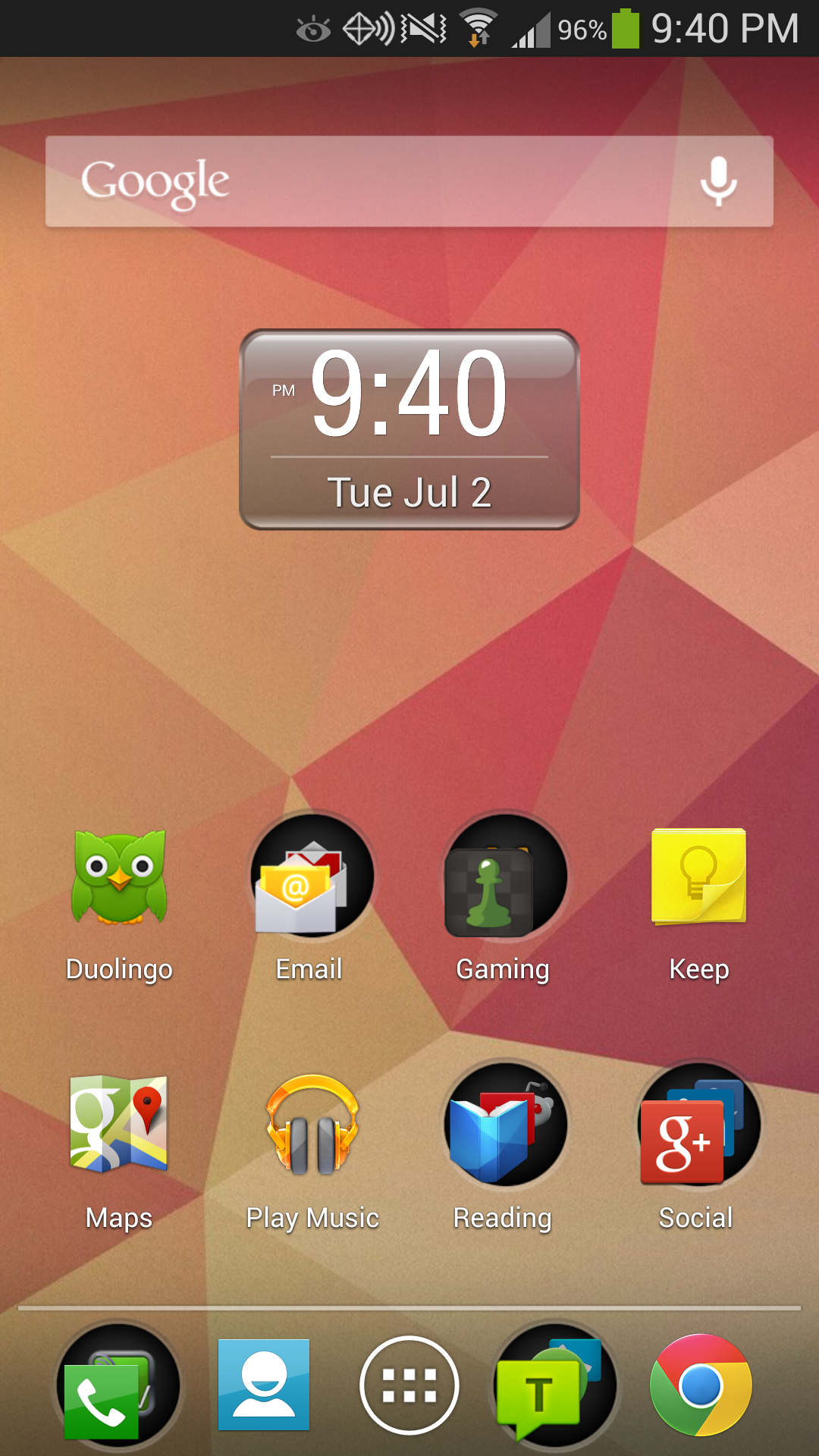 The Samsung Galaxy S4 has been available from some carriers for over two months now.  Verizon, one of the largest carriers and the one I happen to rely upon for service, was slowest to release the phone, citing concerns over whether Samsung could provide the number of units it would need to satisfy demand.  And now that Samsung has sold a number of units which will likely be soon to reach twenty million, Verizon was surely correct in its assessment of the situation.

Fortunately I pre-ordered the phone and it had within a few days of the release date, allowing me to bypass the headache of trying to locate and buy one after its initial launch.  Having had the S4 in my possession for over a month now, I wanted to offer my impressions on the device.  Previously I mulled over the idea of writing a full review shortly after obtaining it, but ultimately I decided I would wait until the dust settled to provide a more casual, real world view of the phone and its performance therein.  Now that the honeymoon period has had sufficient time to pass, I am ready to do so.

(Please note that my post today is largely experiential and personal in nature and exists for the benefit of those of you who may seek to upgrade to the S4 in the near term.  Stay tuned for how-tos and lessons on the S4 in the not so distant future!)

The first weekend I had the S4 I was practically gushing over its quality in most every respect (except for the box; seriously, how could they give the box of a phone belonging to the GALAXY series a wood finish? Could they not have done a more space-like design with stars and the like? I digress…). 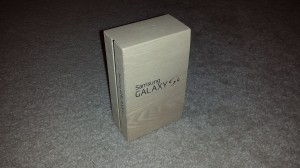 The look of the box not withstanding, the design of the S4 itself was better than that of any phone I had owned previously, the build quality seemed high, and the performance was a cut above anything else I had ever used, including a friend’s S3.  Reading that probably seems obvious, but given how a number of people, myself included, derided the S4 as a marginal upgrade to the S3, the difference is noticeable.

Following that inaugural week, however, my initial excitement over the S4 slowly melted away into a more reserved satisfaction and quiet contentment.  In that post-new phone haze, I began to regard the S4 less as a novel new toy and more as a trusty tool, an extension of myself I had no need to look after by way of being next to an outlet (even with three plus hours of screen time) or restarting it to overcome some hiccup in my usage as I needed to do with my past devices.  I merely had to use it. 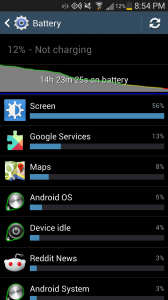 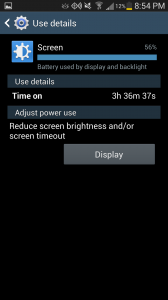 After coming to these realizations I observed that my phone was hardly even noticeable anymore, which is the highest compliment I could ever pay to a phone.  At first, it may seem like a knock, but in reality, I would have it no other way.  Finally I had a phone that stayed out of my way and just allowed me to accomplish the tasks I set out to accomplish.  Whereas previously I would carry a charging cable and an extra battery for my HTC Thunderbolt and subsequently my Samsung Galaxy Nexus, I have yet to concern myself with the battery life of the S4, which rarely needs to connect to a charger before I retire for the evening at around 10 o’clock (having started at 7 in the morning).  And while I no longer fumble with the phone to change from the stock battery to a spare one while riding the bus or train, knowing that I can if I need to do so is comforting too.  I am glad to see Samsung designing their phones for power users, both by virtue of featuring removal batteries and simultaneously improving battery life even with a 1080p screen to power.

In addition to its reliable hardware, the S4 offers a quality software experience as well.  Benefiting from the strength and speed of a quad core processor underneath, the phone features smooth performance and runs a version of Android 4.2.2 modified with its proprietary TouchWiz interface.  In months past, I have been critical of manufacturer skins on Android, but in the month I have owned the S4, I have yet to flash a custom ROM.  In spite of its atrociously designed menus and the layout of its settings, the stock ROM runs surprisingly well; granted I have most of its extras disabled and I am hiding the real home screen with Nova Launcher Prime, but for the most part, I rather enjoy Samsung’s take on Android. 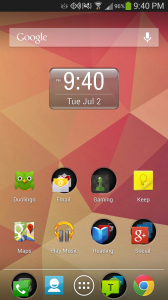 I have even grown used to the bright neon green of the modified notification shade, which contains a handy row of shortcuts at the top.  Having the option to enable/disable airplane mode, mobile data, etc. in the same style of those CyanogenMod-like shortcuts without having to flash a ROM or using Google’s ill-designed stock implementation is a welcome addition to the out of the box Android experience.

However, one truly glaring misstep with regard to the shortcuts is the absence of one for WiFi.  Instead of an icon among the row of other icons, the option to enable/disable WiFi is present only as a persistent notification (!?!!@@!?) below the other shortcuts.  Why WiFi fails to exist as one of those icons will perpetually baffle and frustrate me and may be one of the primary motivations for installing a new ROM, like the newly available one ported over from the Google Experience edition of the Samsung Galaxy S4 featuring none other than vanilla Android (though CyanogenMod is still probably better). 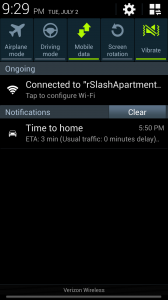 On the application front, the S4 multitasks well and runs all of the apps you would expect and then some.  Not to delve too far into the innumerable software features of the phone, but one of my favorite apps is WatchON, which uses the built-in infrared blaster to connect to your cable set top box/television and control your viewing experience.  Setting it up at my parents’ home the weekend I first had the phone and changing the channels without the remote earned the ire of my sister rather quickly, though the app’s more practical uses have served me well at my home too.

Anyway, the speed and responsiveness with which the S4 operates is certainly an extension of that about which I wrote above: the phone simply works, a phenomenon which I had not experienced previously with any other Android device.  With devices like the S4, Android is reaching a level of maturity in its development that will begin to give competitors like Apple who pride themselves on quality user experiences a run for their money.  Android has long been the most popular mobile platform because of its ability to scale on even the lowliest of devices.  Like HTC has with the One, Samsung proves yet again with the S4 that you can have a reasonably premium device with adequate materials and a quality design and build without having to sacrifice the trademark Android customization and flexibility those of us who have embraced the platform already know and love. 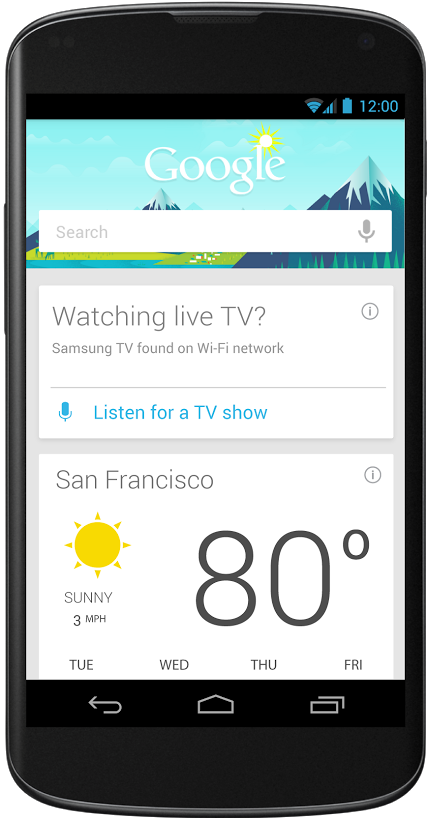 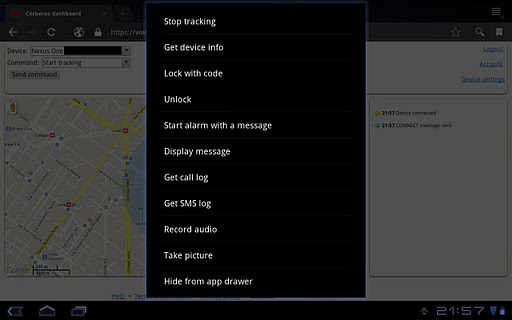