Launching in 3, 2, 1…Your Guide to Using Different Launchers on Android 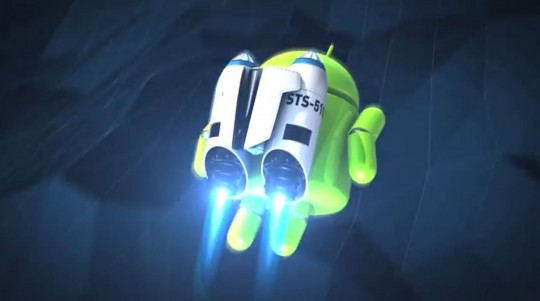 When you turn on your Android phone or tablet, your device greets you with its lock screen, which you unlock, and then its launcher. Every device with Android software uses a launcher, but what is it exactly?

A launcher is the desktop environment from which you launch applications or perform other basic actions, like opening the app drawer. By default, the launcher is an integrated part of the Android operating system. Stock Android has its own launcher, but original equipment manufacturers sometimes skin Android and in doing so modify the launcher and other aspects of the OS. HTC has Sense, Motorola has MotoBlur, Samsung has TouchWiz…Each skin uses its own variation of the stock launcher. 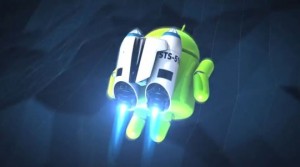 Recently, Nova Launcher Prime, the feature-rich, paid variant of the free Nova Launcher, was sold at a reduced rate on the Play Store during its multi-day sale. Some of you may have purchased the app with no real need for it or understanding of how to take advantage of its features. And even if you did not purchase Prime, you can use the free Nova Launcher to follow along with the tutorial. Note that Nova Launcher is only available for devices with Android 4.0 or later, so if you have a phone or tablet with an earlier version of the OS, then you may want to choose a different app, such as Holo Launcher. Generally launchers have similar designs and features unless they alter the design of the interface radically, like Launcher 7, which uses a Windows Phone 7 style interface.

As I indicated previously, the first step to using a different launcher is downloading and installing it. First, open the Play Store and search for Nova Launcher. Install the app on your device of choice and press the Home button. When you do, you will see the following prompt or something similar (for more information about this prompt, see our lesson on app intents): 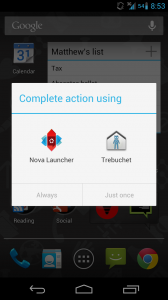 Select Nova Launcher and choose Always; from this point forward, whenever you press your Home button, the device will use Nova Launcher by default. If you want to revert to the stock launcher at any point, open Settings > Apps > Downloaded > Nova Launcher > Clear defaults; then you will have the option of choosing the default launcher when you press the Home button again.

On the Home screen, you will notice two widgets, one which allows you to import settings from a different launcher, and one that allows you to restore previous Nova Launcher settings, which is useful after resetting your device or installing a new ROM. 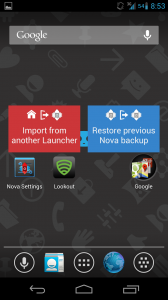 Otherwise, the Home screen is populated with a few other shortcuts, one to Nova Settings, one to download Lookout, a (largely unnecessary) security and antivirus app, and a folder full of Google apps. The customizable, scrollable Home screen dock is replete with the Google Voice Search, People, and Browser apps, and two shortcuts to the app drawer.

The only other item on the Home screen is the good, old persistent Google Search widget. But wait! You can now remove it! So if for whatever reason you do not like the widget adorning the top of the screen, you can delete it to make room for other app shortcuts or widgets.  See!? 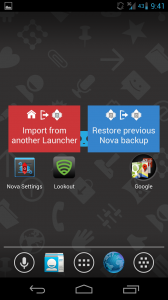 Long-pressing the Home screen also reveals a list of options different than the normal one: 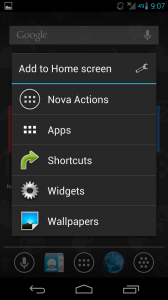 The first option reveals a list of various “Nova Actions”; the second one allows you to add an app or apps instead of doing so one by one from the app drawer; the third one is a list of handy shortcuts; the fourth one allows you to add a widget without doing so from the app drawer; and the fifth one is a list of available wallpapers; all very handy options condensed into a single, accessible location.

Speaking of the devil, the app drawer is laid out a bit differently too.  Aside from snappier transitions between pages, the Nova Launcher app drawer also features a menu button in the upper-right corner that provides you with various options, including the Play Store, Manage apps, and Nova Settings. 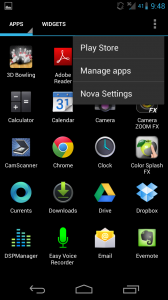 Nova Settings represent one of the best reasons to use the alternative launcher. Without delving too deeply into the numerous options available, the settings provide an abundance of ways in which you can alter the launcher to suit your needs. From adjusting the amount of space on the Home screen to accommodate more apps to disabling the dock, the customizations seem endless.

One of the more unique features of the launcher is the ability to assign and use gestures to perform quick actions on the Home screen. For example, you can assign the “pinch in” gesture to an action like opening the app drawer; or you can assign the “double tap” gesture (tapping twice in succession on the Home screen) to open Google Voice Search or Nova Settings. The possibilities are really limited only by your imagination.

Clearly a number of these features seem useful, but do they merit using a different launcher than the one included with the OS? Truly the decision to use one is based on preference. Many users do it because they like to customize every aspect of their device. Many do it for a (perceived) performance increase, which stems from more fluid and less flashy animations and transitions. Many users choose to install launchers because they like the look of stock Android, which launchers like Nova emulate; if you like stock Android and you do not want to install a custom ROM or your device is not supported by ROM developers, then installing another launcher may be necessary. 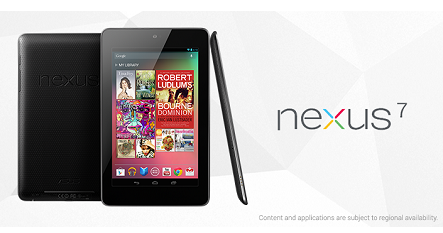 Leave a Reply to bellamee89 Click here to cancel reply.