Project Ara is one of the most ambitious projects coming out of Google, and up until recently, there were a lot of doubts that the project would even be possible. From its humble beginnings as a design proposal to the ever-maturing hardware specification we have now, there is little doubt that Project Ara and modular phones will become a reality in the very near future. Recently, Google hosted their second Project Ara Module Developers Conference, where it was revealed that Ara will be coming to market even sooner that everyone expected, with a market pilot launching this year in Puerto Rico.

The decision to choose Puerto Rico as the place to launch the very first Project Ara devices may come off as strange at first, but the lead project managers went to great lengths to justify and explain their decision. As it turns out, Puerto Rico was chosen because of a few characteristics of the phone marketplace in the region. Since it’s a landscape vastly dominated by feature phones and a large number of service providers, including some of the US giants and some of Mexico’s top providers as well, the phone market is at this point fragmented and willing to take advantage of entry-range smartphones. The main means of Internet access is also through cellphones and 3G devices, and that’s something that a project like this is made for. Also, because it’s a semi-isolated territory, the expectation is that people will try to take advantage of the novel nature of the device in ways that are not immediately obvious. Because of that, Google has decided that Puerto Rico would be a good testbed for the Spiral 2 prototypes, before a Spiral 3 release that should be globally available sometime after 2015. 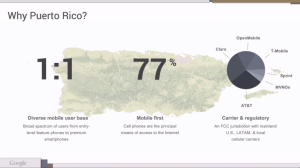 Some of the initial specs and hardware references have changed, and some of the challenges encountered in the project up to now were discussed at length in the conference, but the one thing that became clear is that Google firmly believes in this concept and is willing to go forward with it as a serious product. While hardware releases are hardly the strong suit of Google, with stillborn projects such as Glass still leaving a sour taste in many early adopters that hoped to see the technology widespread, this project in particular seems to be receiving a fair amount of love and polish from everyone involved, and with most of the technical hurdles already being surpassed, the project is gathering attention from hardware and software enthusiasts alike.

Modular devices are a very interesting and potentially revolutionary technology that could change the  way devices are made in the future. It’s clear that, more than believing the underlying capabilities of a modular phone, this team is looking forward to spreading the technology and framework to every kind of device in the future. A phone is a good starting point precisely because it’s incredibly popular, it can be made on the cheap for base-level hardware and it’s something consumers use everyday and thus will be able to catch shortcomings and suggest enhancements that will make the platform stronger in the future. Of course, alongside the hardware platform itself, there is our fan favorite Android OS powering the whole thing and bringing the concept ever closer to mass market adoption. There is also a fair amount of effort being put into Android so that it supports the modular hardware interface, and some of those enhancements could benefit the platform as a whole if Google plays its cards right. As we all know, hardware fragmentation is one of the major shortcomings of Android, and Project Ara introduces standards and software layers that could help solve or alleviate that issue in the future. 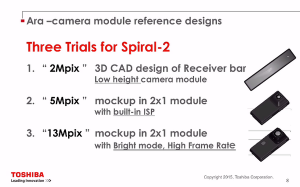 At this time, the Spiral 2 prototype counts with an nVidia Tegra K1 SoC as its application processor, alongside an additional framework processor to handle communication between different modules and the underlying exoskeleton. That’s the sort of hardware that’s expected to ship this year in Purto Rico, with the price set at 50 dollars for the base chassis. There will be aftermarket modules and upgrades available at the side time, including battery and display modules, and Google has even mentioned that they will be promoting Project Ara using a van that will travel, sell and demo the hardware throughout the whole country. While the Spiral 2 is not intended to be the same hardware platform that the rest of the world will be able to buy once the project leaves the pilot phase, it’s a neat proof of concept and Google claims that the objective is to capture users that currently use feature phones and introduce them to the concept that they will be able to turn their phone into anything that suits their purposes. You can see the video announcing the pilot below, along with some of the proposed goals for Project Ara.

Next post How To Read Comics on Your Android Device