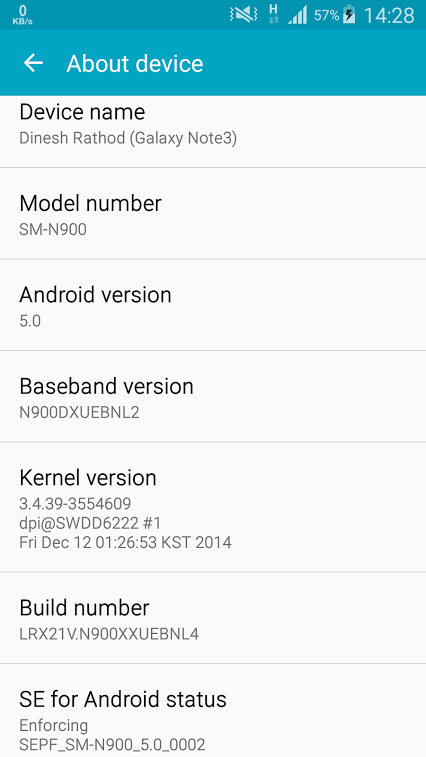 Since the launch of Lollipop, we have seen mobile manufacturers rush to keep up with Google by keeping their devices updated to the latest version of Android, 5.0 Lollipop. One notable absence, however, has been Samsung, which did not immediately announce its plans for update windows, unlike Motorola or HTC, and also was very secretive on their plans about what models would get an update to begin with. Well, Note 3 users can rest assured, as it seems like their update is very much in the works and apparently very close to final release, judging by the latest leak of the upcoming Lollipop update. Let’s take a look and find out what TouchWiz is going to look like in 2015!

A lot of manufacturers, Samsung included, take a lot of pride in their software customizations and skins on the Android space, with Samsung’s TouchWiz being by far the most used and talked about Android modification in the wild. Shipping by default on every single Galaxy S and Note device, TouchWiz occupies a good portion of the Android userbase. A lot of users love it, a lot hate it as well, but the undeniable fact is that TouchWiz has proven to be a resounding success for Samsung, and the added features and visual elements have become synonymous with their devices.

Now, with the upcoming update to Lollipop, a lot of us were wondering how TouchWiz would look, since there is now a new set of visual standards and elements in place that would clash with the previous style. Well, worry not, as Samsung has been hard at work adapting TouchWiz for Lollipop and giving it the all-important features you’re used to, while at the same time adopting the shadow and  animation-heavy aspect of Lollipop. Let’s start with the basic visual aspect and user interface: 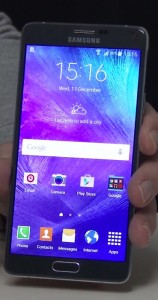 As you can see, there’s not a drastic change. The same icons and basic visual elements are there, and they are the same as in KitKat for the most part. Things start to get a bit different when you start interacting with the device, however. For example, the notification widgets are still there, but the black and dark visual elements are gone and instead we have more subtle fades and visual elements that resemble stock Lollipop. The widget icons are still the same monochrome, round shapes that we are used to, but in fact these fit in right there with Lollipop and don’t look terribly out of place: 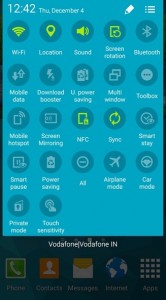 As you can see, Samsung also adopts its own color scheme, based around white backgrounds with a cyan accent that changes according to the currently opened app, as expected: 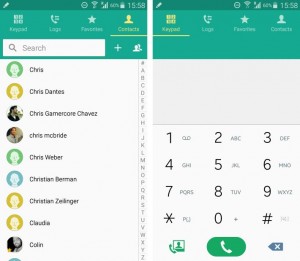 This is the part that kind of clashes with the usual Samsung styling, which usually goes for black to highlight the advantages of the AMOLED screens that Galaxy devices use. This is a welcomed change, however, since it reflects what stock Android  is doing and it will look right with third-party apps. The blacks will still look amazing on the Samsung screen regardless of the theme, and your videos and photos will still look vibrant and realistic: 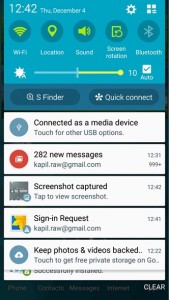 The Settings app has suffered a pretty major change, even though it doesn’t bend to the stock Android Settings app either. Instead, the new app does its own thing: there’s a set of tabs at the top that you can use to toggle between different sections and the settings themselves are just the traditional list that you can interact with. This tabbed interface was present as a choice in the old TouchWiz releases, but it seems like it will now be the default and there may not be an option to change it back: 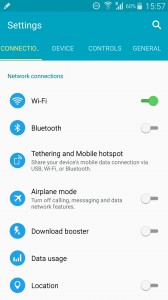 Besides that, the Overview feature that allows you to switch to another task or app looks and feels the same as in stock Lollipop, with a few added options. Seeing as Samsung already used a similar interface on previous versions of Touchwiz, this doesn’t come as a surprise, but it’s nice to see manufacturers increasingly adopting a stock solution that just works instead of hacking something together by themselves:

Besides all these small changes, things are pretty much as you expect, if you’ve used a Lollipop device before: there are animations everywhere and there are all these subtle changes that make everything more pleasing to the eye and more interesting to look at. But one of the biggest questions is actually about something more low-level and not as apparent: what is the performance like? The good news is that the performance improvements from Lollipop seem to carry over just fine and actually help with some of TouchWiz’s rougher spots, namely the GPU performance during the UI and the memory usage: 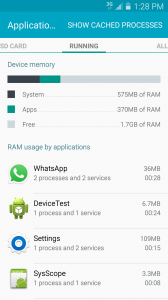 Things are reportedly smoother than ever and Lollipop seems to get rid of a lot of the issues that TouchWiz has been criticized for over the years, seeing as it now acts as a thin layer between the Android OS and the user. Samsung under-the-hood customizations seem to be at an all time low and things are just working as intended. Of course, it’s still to early to find out any major issues, especially since we’re dealing with an early version, but things are looking good so far. If you’re interested in finding out more, you can see a walkthrough of TouchWiz on Lollipop in the video below. Or just wait until the end of January, which is when the update is expected to have officially rolled out to everyone. 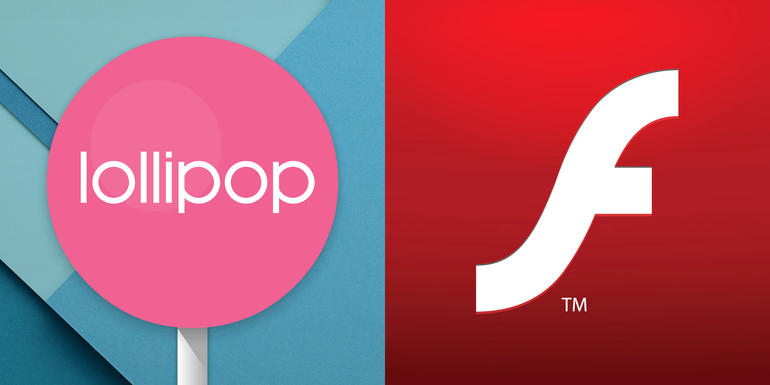 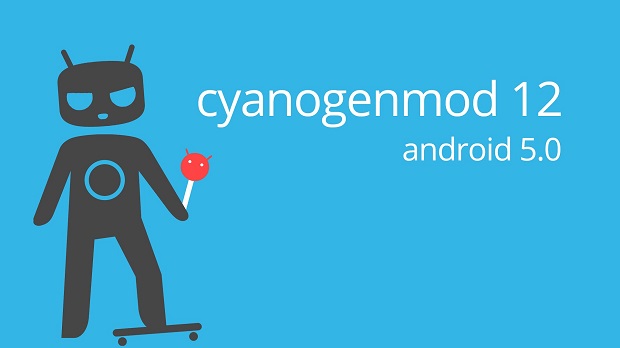