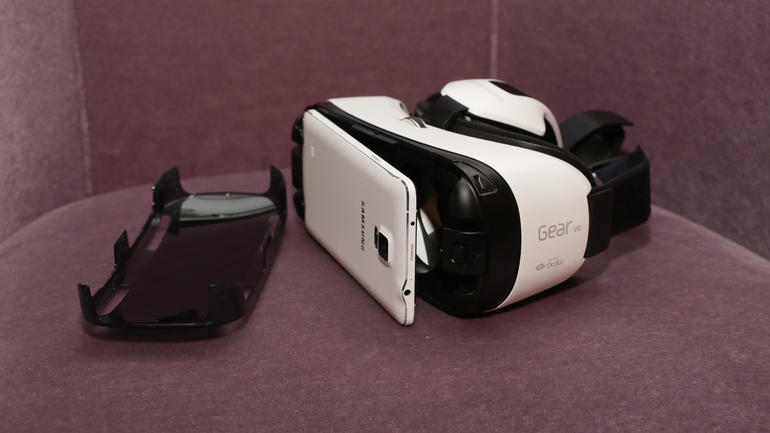 Virtual Reality is one of the most interesting and popular emerging technologies concerning games and 3D graphics from the last few years. While CPUs have gotten faster, and graphics have gotten better, new technologies to provide and enhance the experience have begun to appear – starting with something as simple as the Wiimote and now full fledged VR headsets. Products like the Oculus Rift have made the concept of an affordable, accurate real-time VR headset possible, and so more and more companies have begun to bank on this technology. One of these companies is actually Google itself, with the Google Cardboard VR demonstration at the last edition of the I/O conference. Alongside these companies, Samsung has also begun to show increasing interest in this technology, and have now released their very own Android-based mobile VR headset. But how does it work, and what can you do with it? Let’s find out!

The product that Samsung has created is called the Samsung Gear VR. This is actually not a fully internal Samsung product, though. Samsung has partnered with Oculus itself to build the Gear VR, taking advantage of their expertise on the field and their mature software to power this unit. This collaboration is actually not a big surprise, considering that Samsung has been providing components like the AMOLED display to the latest Oculus Rift revisions and the companies have been talking for a long time now. Still, this is a surprisingly innovative product with 2 of the biggest names of their field behind it, which is something you don’t see every day. 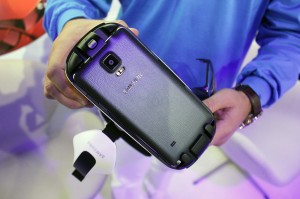 The Gear VR is actually not a completely independent VR headset in the traditional sense – to start with, it has no display, and no real computing hardware to speak of. The unit consists of a headset with a number of highly accurate sensors and position tracking hardware, and a touch-sensing area on one of the sides, along with a back button and a volume key. The catch is simple: the Gear VR requires a Samsung Galaxy Note 4 to work. The Note 4 provides the display, computing hardware and overall software needed to couple into all these sensors and use them for the various games and upcoming applications compatible with Gear VR. You just insert the Note 4 into a specific slot on the Gear VR and attach the cover – the phone will automatically detect that it’s attached to the headset and launch into VR mode. All of the software, of course, runs on Android, and the Oculus/Gear software has to be installed beforehand. 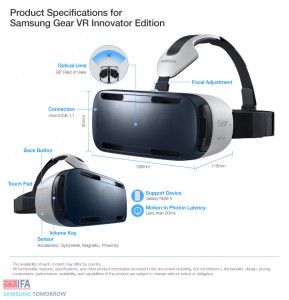 Early reviews of the Gear VR have been mostly positive in terms of the hardware, citing latency and head tracking comparable to the previous edition of the Oculus Rift and noting that the headset is surprisingly robust and light. Of course, the elephant in the room is the simple question of what you can actually do with it. And that’s really the catch at this point – while the Gear VR app actually comes with some VR ready software, like movie trailers, panoramic visualizations and a game or two, there just isn’t an ecosystem of VR-ready apps on Android quite yet. The fact that the Gear VR also requires a Note 4 and isn’t compatible with any other phone really is a huge miss in terms of mass appeal for anything like this. Lastly, while the hardware is solid in terms of tracking, it doesn’t do everything that the latest Oculus Rift unit does – even though it does most of it. The potential of the VR apps is also limited by the specs of the Note 4 that, while not a being a slouch in any way, still won’t really be able to offer high-fidelity graphics in comparison to a decent computer. 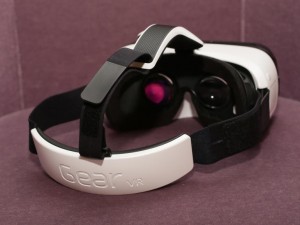 There’s a lot to like in the Gear VR, especially considering that it is a first foray into a very risky business. The partnership with Oculus adds a lot to the product, and their endorsement came with software optimizations and general guidelines that paid off and made something like this even possible. John Carmack, probably one of the most recognizable names in games and graphics technology, has personally endorsed and developed for the Gear VR though Oculus, and has made the claim that this is only the beginning, and this product really shows the potential for mobile VR. For regular users, this product probably won’t be of much interest, though. The fact that it requires such specific hardware and the fact that there are no killer apps for the Gear VR just yet mean that it is, at the time, little more than a toy for early adopters interested in VR technology. This could change in the future, especially if Samsung decides to expand Gear compatibility to other devices or encourage developers to make software especially for the Gear, but at this point it’s a risky and mostly fruitless purchase for the average user. However, if you are into the technology and can spare the money, it’s a cool look into the future. You can see a video showing off some of the features below: