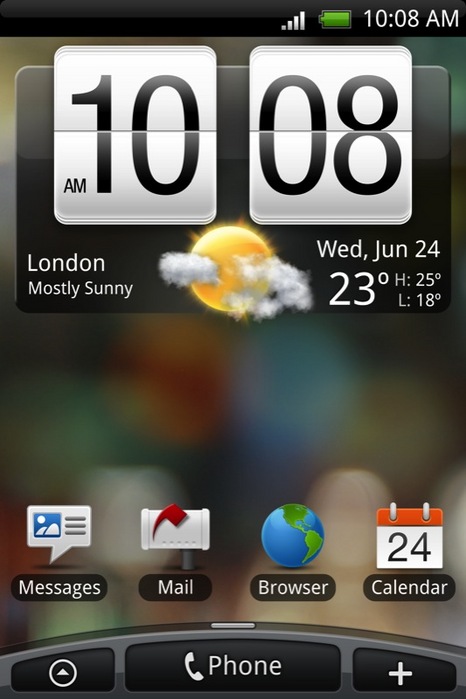 Ah, widgets. The ability to use widgets is one of the unique aspects of Android. Few other mobile operating systems offer users the option to use them; but are they useful? And if so, which ones? What are widgets even?

A widget is a component of an interface that allows users to interact with or perform an action in an application without necessarily having to launch the application itself. Certain apps also benefit from widgets because of their ability to display information without forcing the user to load the entire application to view it. A common example, and one that I remember from my first Android phone, is the clock and weather widget present on stock HTC devices.

Widgets, like that one, sit on the screens of Android phones and display either static information, actions, and options or ones that change with time, location, and other variables.

The problem with widgets is that Android phones often come pre-installed with different widgets depending on the manufacturer; for example, HTC has its variation of the clock/weather widget, but it may look different than the ones from LG, Motorola, and Samsung. Therefore, pinning down the best widgets across multiple phones and, perhaps more significantly, different versions of Android is a difficult task.

Nevertheless, I have compiled a list of the best widgets available for Android using my Samsung Galaxy Nexus and Asus Nexus 7 (widgets shine in particular on the larger screens of tablets) as a baseline. Those of you with devices running older versions of Android may have widgets that have a different design and that lack the ability for custom resizing (a standard feature in Ice Cream Sandwich and later), but with many manufacturers now producing devices with newer versions of Android, we hope this list of mostly free apps/widgets will be helpful to you. 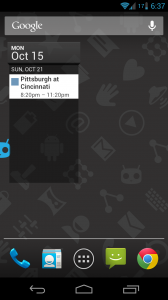 The stock Calendar application on devices with Android 4.0 and up provides an experience on par with that of Google Calendar on the web, and the widget acts as an extension of that experience. It displays the current day and date, as well as any upcoming events in your schedule, all synced from your Google account, of course. The widget is useful for the simple fact that it displays your next appointments or meetings or whatever you may have planned and allows you to view more detailed information by selecting a particular entry. Moreover you can select the current day and date at the top and load the full Calendar app like you would selecting the app shortcut. The widget is probably one of the most commonly used widgets available on any make or model of Android device and any version of the OS, and for good reason. 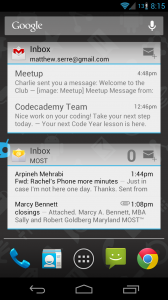 Gmail is undoubtedly one of the most popular services that Google offers, and its mobile app offering matches the quality of the desktop one. In addition, the stock Email app also offers a strong client that you can use with whatever email service you like best. It stands to reason then that the widgets for such important apps are just as important. The widgets feature a scrollable interface that allows you to view emails within the folder you select, which is probably most commonly the inbox. Like with the Calendar widget, the Gmail and Email widgets allow you to select an entry, or email in this case, to open the message directly instead of opening the app and selecting the message. The top portion of the widgets show the unread email count and provide a shortcut to create a new email. For those who like to stay on top of their email, the widgets for these apps display the most recent messages and allow you to access them quickly and effortlessly.

Evernote, one of the entries in our Top Ten Productivity Apps for Android, is a powerful note-taking application. The Evernote widget is simple in design if a bit awkward in setup. The new Evernote Widget, a separate install on the Play Store, is an add-on to Evernote itself. What it lacks in neat implementation, however, the widget makes up for in customization. Users can decide whether they want to have individual icons representative of common actions or a whole row of curated functions. If you like Evernote and widgets, then the widget extension is a must-have. But if you dislike Evernote for whatever reason, alternative note applications, like Catch for example, offer similar widgets for users. Given that Evernote is probably the standard for note-taking on pretty much all platforms though, you would be hard-pressed to find a better, more customizable setup.

Another simple widget, the one available with the Google Play Music app is sleek and functional. Separated into two bars, the top bar features the album art of the current song, a “thumbs up” button you can press to indicate if you like a song, and play/pause and skip controls; the second bar features the name of the song in bold followed by the name of the artist. The widget offers the functionality that most users probably seek, and if you are not a fan of the pull-down notification shade playback controls, then you will find yourself using this one on your home screen. Note that if you use another music player, perhaps even the stock Android one, their respective widgets may offer different controls or options. 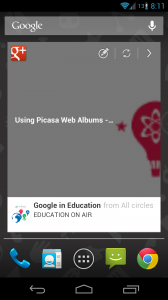 For my money (or time really I suppose), Google+ is a better social networking service than Facebook, but even if you like Facebook, users generally agree that, for now, the official Android experience is awful, and I imagine the widget can do little to change that. Regardless, if you use Google+, the widget is quite nice; and if you do not, and you are already deep in the Google ecosystem, the widget is a good reason to come around and try it. The widget displays one post at a time from any or all of your circles and allows you to move seamlessly from post to post. It also features a comment button that allows you to compose a comment for the post currently in view and a refresh button to see what is new. Generally social networks can take advantage of widgets better than most apps because of their inherent interactive elements, and Google+ is no exception; but if it is not your social network of choice, try out widgets from various Facebook or Twitter apps to see which one best suits your needs.

Google Reader is my preferred RSS reader, and having access to a scrollable widget containing a list of my unread items is a quite a handy feature. The flexibility of the widget is welcome too; you can choose to have it display all of the items from your subscriptions or just one of them. The top bar shows the name of the feed, the unread count, and a refresh icon to check for new items. Selecting an item in the list opens that item directly, and touching the top bar opens Reader to the selected feed(s). A widget could not be more simple.

In stock Android, the persistent Google Search widget atop the home screen is a permanent fixture, removable only if you use a custom launcher (look for an article on how to use Nova Prime and other custom launchers to improve your Android user experience soon!). Despite that, the search bar is something that you probably want present anyway, especially given that it moves with you from screen to screen, thereby allowing you to perform a Google Search query wherever. Touching the bar opens a text box into which you can enter your query, and then searching executes the query in your default browser. While the experience could be faster, the widget lets you avoid opening your browser of choice and typing in “www.google.com” manually. Search is the most important aspect of Google and, consequently, Android; the widget is a natural and expected extension of that. 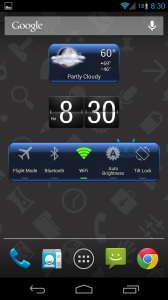 I covered HD Widgets recently in my Pay or Pass feature after the Play Store sale, and I gave it an unfavorable pass, mostly because I thought that most users would not benefit from it with the plethora of widgets available by default. On the other hand, I also said that the widget package offers a great deal of customization for those who do like widgets. Check out the copy pasta from my other post to see more details about HD Widgets.

“HD Widgets is an app that allows you to create custom widgets for displaying information like time and weather or toggles that control device functions, like WiFi.  I rarely use widgets myself, but when I do, the stock ones generally suffice.  Even still, if you need additional widgets for your app or function of choice, then you could just as easily find comparable ones for free elsewhere on the Play Store.  Then again, if you really like widgets, HD Widgets is not a bad app whatsoever.  $1.99 is a bit steep though for an app that really only alters the cosmetics of just one or two parts of your home screen, especially when for most users the prepackaged ones will do just fine.”

If you do not use a device whose manufacturer allows for the use of custom toggles in the pull-down notification shade or if you do not use CyanogenMod, then the Power Control Toggles widget may be for you. The widget provides users access to various toggles that enable/disable or increase/decrease anything from WiFi to  Bluetooth to GPS to Sync to Screen Brightness, all without having to enter the Settings section to do it. If you have room on your home screen for a widget, then this one is a solid choice. Not only does it save time, it also encourages users to turn various battery-depleting settings on and off as needed. The Power Control Toggles widget is a useful tool for most any user.

Another app from our Top Ten Productivity Apps for Android, Tasks is one of the best to do list apps for Android; the widget alone is a compelling argument for that. It features a scrollable list of tasks from the selected list, and you can edit entries or mark them complete right from the widget. You can even add additional ones as well with the handy new task button in the top right corner. Though simple in appearance, the functionality of the widget is on par with the rest of them and makes a quality app even better as a result.

On a related note, adding widgets to your screens in Android varies from device to device, so you may have to explore your phone or tablet to determine how to do so. In stock Android, open the app drawer, select the Widgets section at the top, and touch and hold your widget of choice to place it on the current screen. Otherwise, try long-pressing, that is, touching and holding, the screen on which you want the widget, and waiting for a menu to pop up; you may have access to a widgets option there. 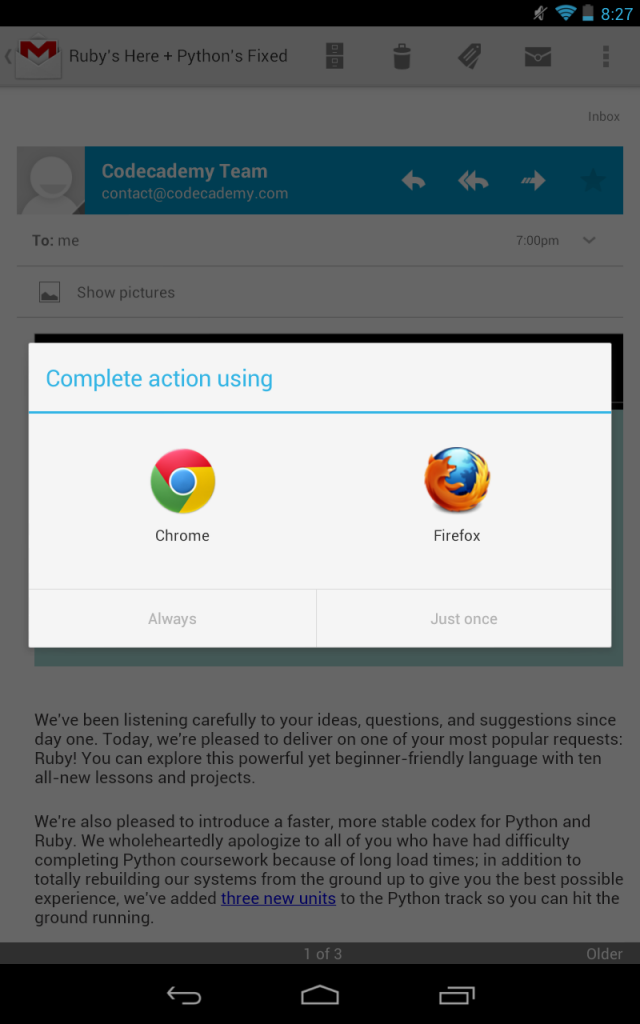